Get Ready For Game Time 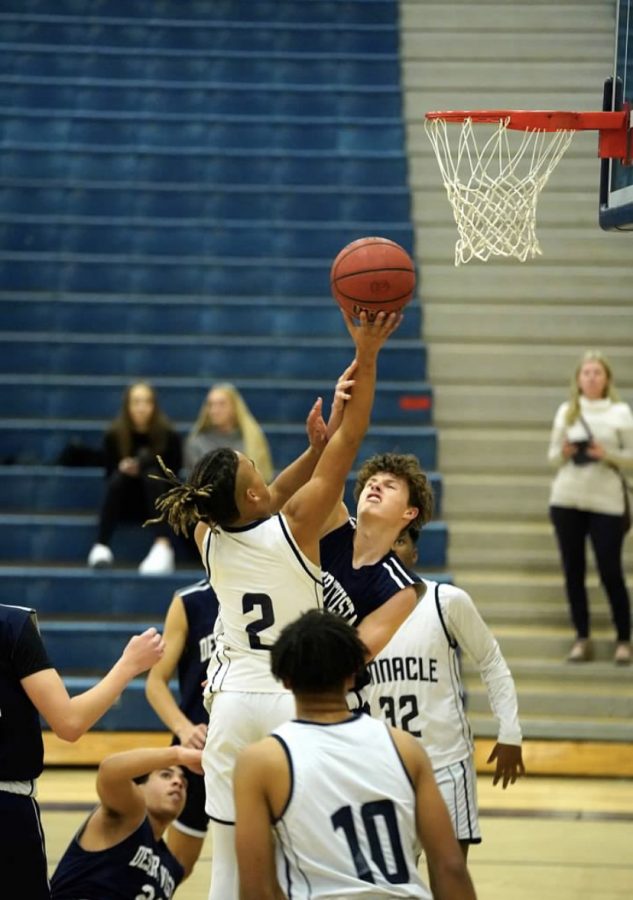 It’s almost game time. The Freshmen Boys Basketball team warms up while listening to their pregame playlist to get pumped. The captains shake hands with the other team and everyone takes their positions on the court. Silently they all wonder: will we win the game? Before the thought has a chance to set in, the buzzer sounds and the game begins.

Almost as important as conditioning and team practices, many athletes develop pre-game rituals which they consider essential to their success. The freshmen on this team participate in this tradition.

“Before every game, I pray in the locker room, alone,” starter Myles Libman said.

Like Libman, several players perform personal rituals. But these individuals come together, somewhere between practice, warm ups and the game itself for their unofficial team, pregame rituals.

“We [the team] usually do a dance circle in the locker room before our games to get us pumped for the game,” said center Elijah Paige. “When we do the dance circle it makes me feel ready and the nerves go away.”

Now in his seventh year  playing basketball, Libman absolutely loves the sport. It offers him a physical challenge, but he also makes it personal.

Just as his family offers him confidence through their support and encouragement so he can play his best, Libman recognizes the importance of calming the nerves of his teammates before every game.

“I will give them a pregame speech letting them know how good they are. The most important line in my pregame speech is, ‘If what you did yesterday seems big, you haven’t done anything today,’” Libman said.

Libman remembers his coach’s advice “[that] winners are ordinary people with extraordinary determination.” He remembers this because coach Williams, his current PHS coach, gave the advice to the team at halftime during the Boulder Creek game. In Libman’s words, it “made us realize that we still had a chance, and we came back and won.”

“Attitude is a key factor because if you don’t believe you can do something it will never happen,” Libman said.

Paige started playing basketball at ten years old, developing skills and a love of the game since that time.

“My favorite drills in practice are shooting drills because of the competition and because it is a huge part of the game, so [the drills] makes me a lot better,” Paige said.

In his first season playing high school basketball, Paige hoped to learn and improve as a player.

“I just want to get better. It’s my freshman season, so wins and losses aren’t the biggest concern, just growing as a player. I want to improve in all aspects of the game. Shooting, dribbling, and being a great teammate, ” said Paige.

One of the highlights of the freshman season, the hard-won Brophy game impacted the players.

“It was a tie game; 8 seconds on the clock. The ball is passed to Matt Storms in the corner. He shoots, it goes in and we win. The crowd was cheering and that was an amazing feeling. Winning is just an indescribable, great feeling,” said Paige.

As freshmen, players naturally look to their future in sports, in high school and possibly college or professional sports later on.

“My goal for the future is to eventually make varsity,” shared Paige. “I look up to [PHS varsity player] Tosh Baker. He plays my position and excels at it. He is a huge role model,” he said. “Honestly I look up to all the varsity players because I can see myself in all of them. They all went through the same things I go through because they were once freshman.”

The freshmen finished their novice high school season with a record 12 – 6. These players hold much promise for the future of PHS basketball.