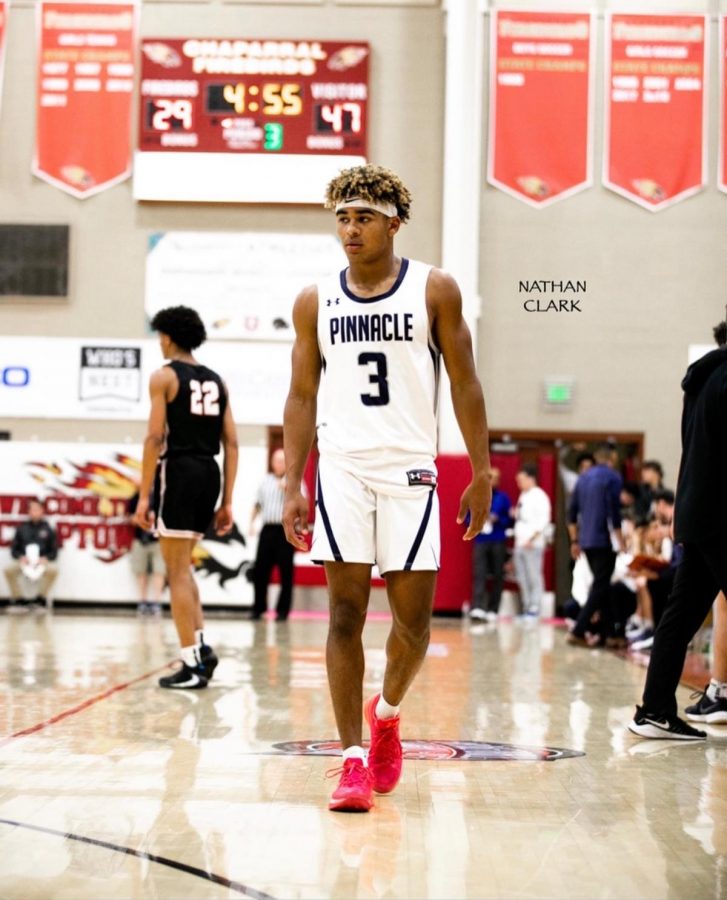 With the game only minutes away, the Pinnacle (PHS) Varsity Boys Basketball starting lineup is announced. A spotlight highlights the passion in each player’s eyes. With no sign of hesitation, they rush onto the court and get ready to play.  With stands full, energy fills the gym and everyone cheers. It’s game time.

This season proved to be a challenge, with the team struggling for a winning record. Despite their losses, the team’s attitude remained positive. The players relied on each other and their captains to keep fighting to make it to the postseason.

“[I] believe the team has the competitive edge to never give up. I am proud of the attitude the team has this year and I think it will benefit the team many times this year,” said head coach Charles Wilde early in the season.

Like their coaches, the players also recognized the power of a positive attitude. Upperclassmen on the team helped create the team’s upbeat mentality, on and off the court.

“The attitude is always exciting on our team and we have a great time with each other,” senior starter Marcus Libman said. “Kaden is super positive and a huge part of the team,” he said about Senior Kaden Kranson.

Of course, in a season of wins and losses, players often get discouraged and teammates turn to each other for encouragement.

“I just start screaming and have lots of energy,” shared Libman, “Energy gets us going and the team motivated to work harder.”

When faced with a challenging season like the one they endured this year, the players learned many valuable lessons together.

“The team’s mindset is very strong. Everyone always wants to win and work hard in practice,” Libman said.

Leaders on the team played an important role in motivating their teammates to play their best.

“[One thing I would like to contribute to the team is] being a leader by motivating my team to work hard and always lead us to victory,” said Libman.

Coach Wilde added, “Teamwork is everything for our program. We want to be one unit working for the same goal while giving up individual stats. We must trust and play for each other every practice and game.”

Looking back on their time together on this team, Libman felt inspired. “No team I would rather play with,” he said.

The team went 11-15 in the regular season and qualified for the playoffs. They won their first two playoffs games, the first against Boulder creek on February 14th and their final win against Highland on Wednesday, February 19, ending with a score of 70-59. They lost their game Saturday, February 22nd, against Mountain Pointe, 83-74, ending their season with fond memories for the seniors and high hopes for next year.