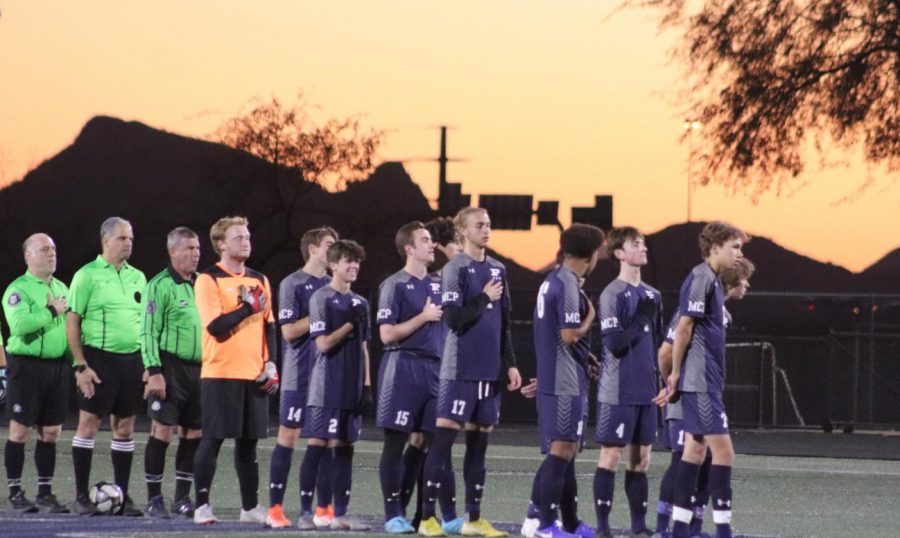 At Pinnacle High School (PHS), the boys’ soccer team went to great lengths to condition and practice to become the  best. The team showed excellent game play this year. Throughout a typical week, the team maintained an intense schedule of games and practices, which made the games entertaining for everyone watching. PHS fans enjoy intensely competitive games,  full of high energy, and the varsity boys’ soccer delivered the whole season.

In order to keep up with this tough schedule and to win, the team embraced tough conditioning at practices.

“[They do] a wide variety of drills, [they] do a lot of possession type drills with quick ball movement and get a lot of touches on the ball,” said coach Justin Hughes. “Also, as far as conditioning goes [they] will do a lot of interval training, including sprints to jog back to sprints to get the quick movements.”

To motivate the players to work hard to make it to State, Coach Hughes began the season with a plan.

Hughes believed that despite the intense schedule of games this season his team could “make it far because we work hard during practice to get better.”

Junior Drew Wiebe, forward/midfielder,  proves himself a key member of the team because he works hard  as a team player,

“Wiebe uses his teammates and trusts them whenever he passes it to them,” captain senior Nick Bianchi said.

“We have already battled with tough teams and have proven to be able to beat anyone,” said Hughes.

As the year progressed, coaches continued to push their players to improve and strive to make it to the State championship, though they, unfortunately, fell short of this year. The coaching staff and players worked hard, ending their season with a record to make PHS proud.

The boys’ varsity soccer team didn’t make it as far as they hoped,  but they made it to the first round of playoffs, losing their first game to the Chaparral Firebirds. The work they achieved this year sets the team up with much hope for next year.