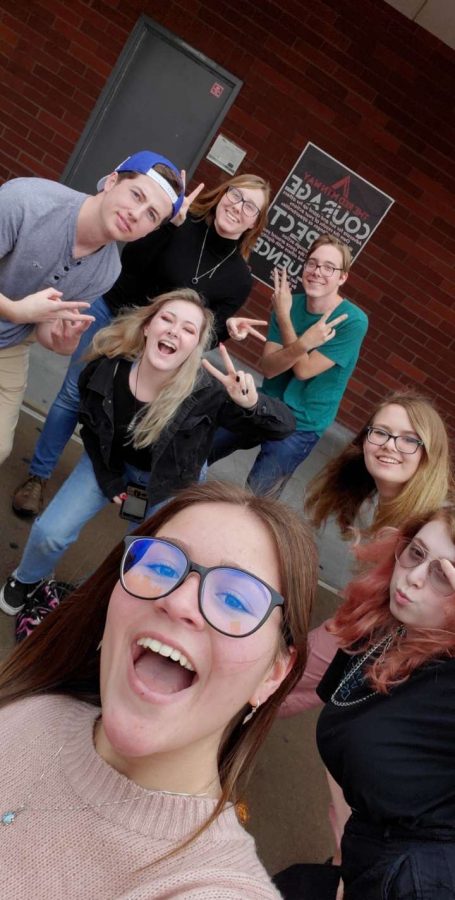 Of the great variety of interesting clubs at Pinnacle High School (PHS), the Poetry Club stands out for offering its members a venue to explore creativity and freedom of expression. The Poetry Club formed in 2017 after Project Lit, a movement begun by artists to empower student readers and writers, visited the school and inspired a group of PHS students who saw the performance with their English class and created the PHS Poetry Club.

Three years ago, senior Abigail Bowers, joined as one of the first club members. Since that time, Bowers took on a leadership role, serving now as the club president, with a goal of supporting others like her who hold an appreciation for the written and spoken forms of poetry.

“The club is a fun place for inspiring poets to come together and work,” said Bowers.

Currently, the club offers many fun and artistic events that provide students an opportunity to participate in their love of imaginative and creative writing.  The Mesa Arts Center facilitated many of the club’s activities outside of school and even helped some of the club members get published in a book during April of 2019 with other Mesa and Phoenix area highschool poets, That book, Monsoon Heart, available for purchase on Amazon, developed as a product of Project Lit.

The members of the club focus on making it an open and inviting place for students who want to freely express themselves without judgment or the pressure of receiving a grade. Sponsored by English teacher Katie Fizz, the club hosts activities to help students access a variety of outlets to express themselves and cope with things in a healthy way, through different types of spoken and written poetry.

“The goal of the club is to provide a safe space to give students a voice and outlet for real-life problems, to communicate with their peers with no judgment,” said Fizz.

On  February 22, some members of the Poetry Club, including juniors Nicole Whitten, Bailey Stalford and Meghan Patnode, participated in the Louder Than A Bomb Phoenix poetry competition against several other schools at Red Mountain High School. The team of Whitten, Stalford and Patnode placed third, and the other team from PHS with Lauren Lindenbaum (11th), Skylar Haddix (10th), Steven Reid (12th), and Trinity Ebersole a former PHS student who now does Paradise Valley Online placed second, so they will be moving on to the semi-finals on March 6th at Mesa Arts Center.

Whitten said,”I thought the competition was an eye opening experience, because my teammates and I got to see a more vulnerable and emotional side of people as opposed to the more superficial self people usually show.”

The Poetry Club participated in this competition for the past three years and earned second place in the competition’s finals in 2018. In December 2019, the club also participated in an event called Unity Day to promote making connections through poetry with other students from all over the Valley through the spoken word poetry program, Phonetic Spit, the same program which helped to publish Monsoon Heart.

“ The club is a place where many kids who don’t have a creative outlet in class or want to try something new have really been able to express themselves,” Fizz explained.

In addition to the performance activities, Poetry Club fosters a goal to provide the opportunity to its members to improve their public speaking skills, while also encouraging strong writing. Members of the club participate in group writing activities, providing feedback on each others’ poetry. For the artistic and creative students at PHS. The club meets on Mondays from 2:15p.m. to 3:15p.m.  in room F118 and welcomes any new members.